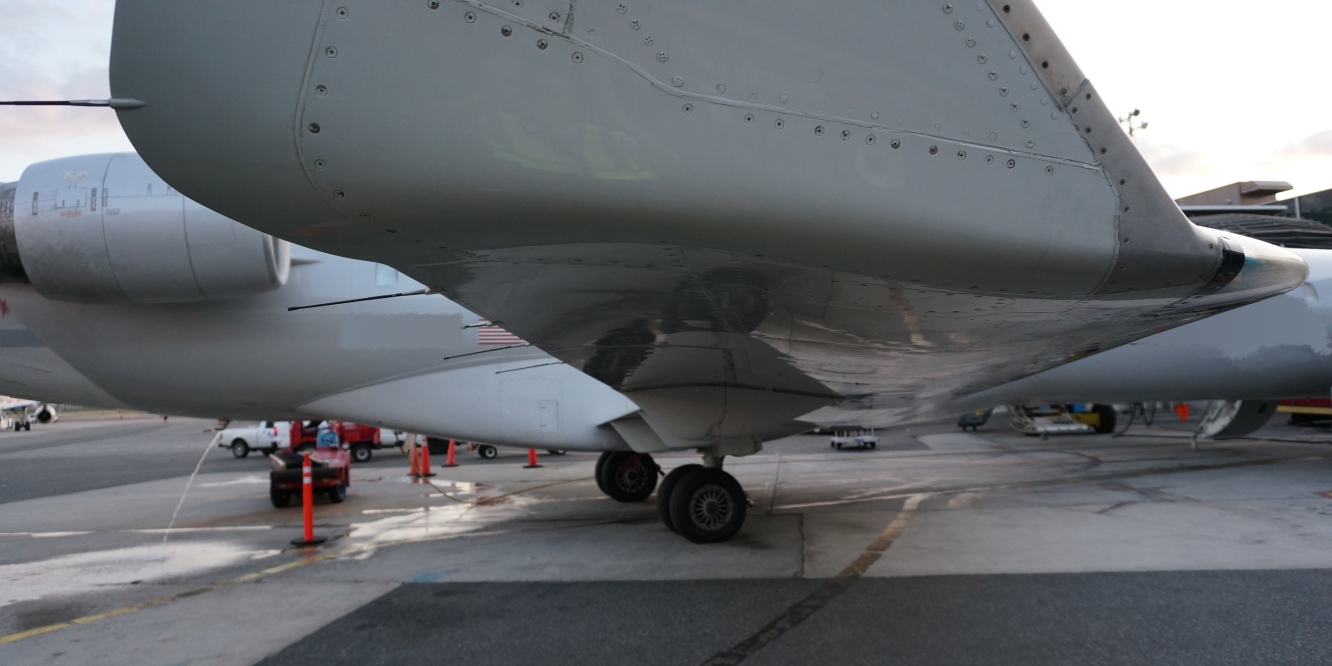 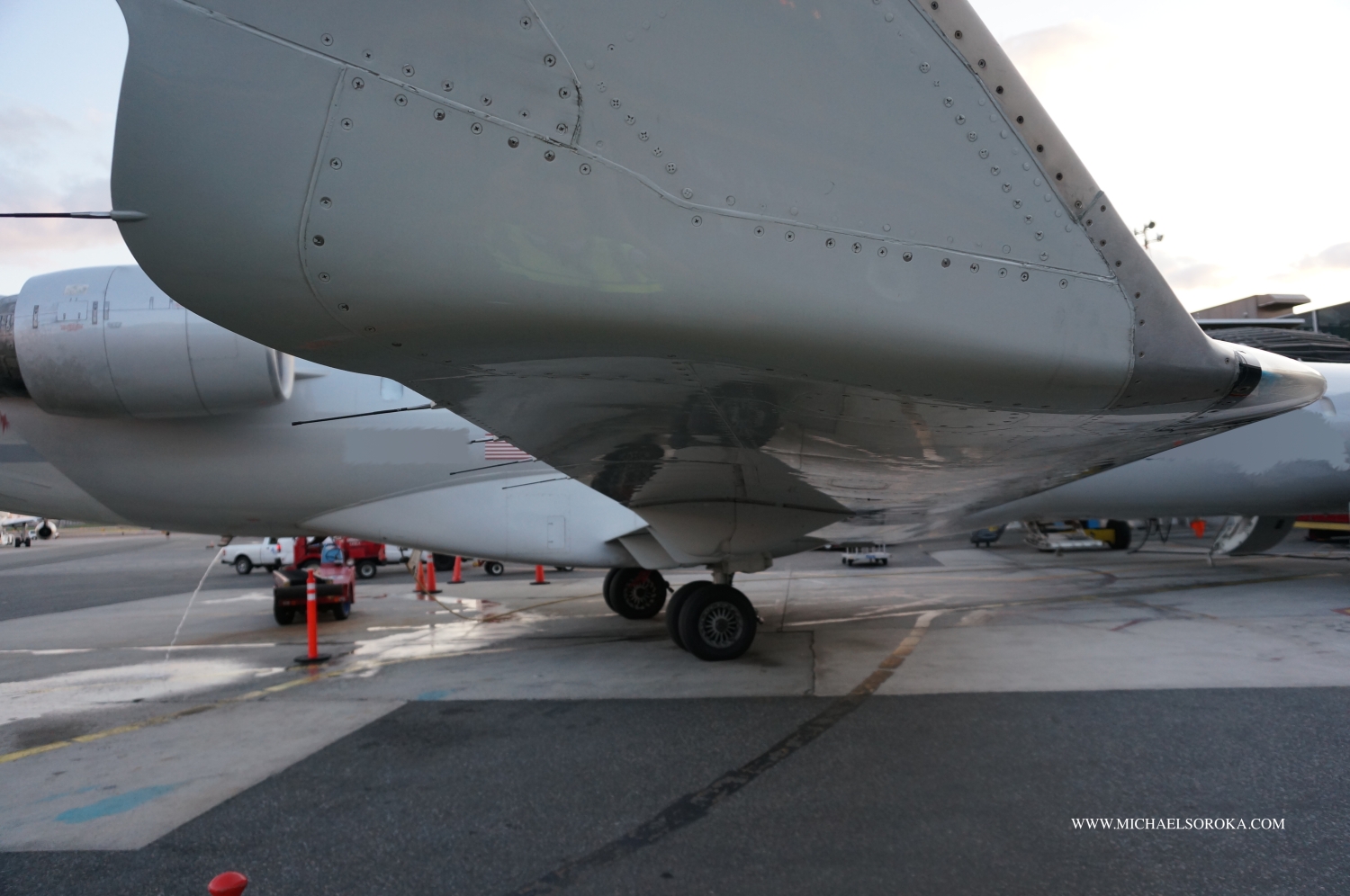 “Wow, it really is curved on the bottom!” I still remember how surprised I was when I took my first look at the wing of the CRJ. The reason for my astonishment was because the wing of the CRJ was designed significantly differently than any other plane I had flown before. In fact, the CRJ series of aircraft incorporates one of the most pronounced examples in the entire fleet of transport aircraft of a specially designed wing type called the supercritical wing.

In this post, I am going to shed a little light on the supercritical wing and discuss how it works, and how it compares to a conventional wing. This mid 1970s invention, though seldom discussed, has allowed airliners to fly faster and farther, while burning less fuel. In essence, the supercritical wing has revolutionized modern air transportation.

During early testing in the 1940s and 1950s into supersonic flight, it became apparent that flight into the supersonic regime presented some serious engineering problems. It was quickly noted that when an aircraft approaches and passes the speed of sound, many unfavorable things begin to happen. Two of the most notable of these effects are the sharp increase in drag caused by the formation of a shockwave, and the rearward shift of the center of lift generated by the wing.

These challenges were eventually compensated for in the designs of supersonic military aircraft, but transport category aircraft were left orphaned with wing designs from the days Wilbur and Orville.

In the early ‘70s, when the economic demand for cheap high-speed air travel became greater, research began into a new type of wing which would perform more efficiently at near supersonic speeds. This eventually led to the development of the supercritical wing.

So, what is a supercritical wing and how does it work?

When airflow around an aircraft exceeds the speed of sound, shockwaves are generated. These shockwaves, among other unfavorable things, greatly increase the force of drag on the aircraft. Because the drag rise caused by supersonic flow around an aircraft is so sharp, the aircraft’s engines have to produce significantly more thrust to push through the air with shockwaves than without them. This causes a much higher fuel burn for a fairly small increase in speed.

As a result, supersonic passenger travel is extremely expensive because of the huge amount of fuel supersonic aircraft have to burn to push their way through the shockwave. Thus, the economic demise of the Concorde and reason all modern airliners fly at a speed slower than then speed of sound.
Even though shockwaves begin to form when the airflow around an aircraft reaches the speed of sound, this doesn’t mean that flying just under the speed of sound will keep an aircraft shockwave free. The reason?
Some parts of an airplane, the wings in particular, have a shape which causes the air flowing around them to accelerate. This means that an aircraft can actually be flying at a speed well under the speed of sound, but have localized areas where the airflow is actually supersonic and is generating nasty fuel sipping shockwaves.

So, you may be thinking, with all of its advantages, why don’t all aircraft have supercritical wings?

Well, as with everything, there are always tradeoffs. Where the supercritical wing shines in the high speed, transonic flight regime that the airliners and business jets thrive in, it will never be seen on a small piston powered aircraft that you would find putting around the local municipal airport. The Reason?

The supercritical wing is structurally more complex than a conventional airfoil, and therefore more expensive to build. The aft section of the airfoil is particularly stressed because it produces a significant amount of lift over a fairly small portion of the wing’s structure. Because the aft section must also be thin, it means that special methods must be used in its construction.
When the supercritical wing was being developed, the structural problems associated with the heavily loaded aft section of the airfoil were eventually compensated for by incorporating a blunt trailing edge to beef up the structure. This has become a defining feature of supercritical wings, and is evident on the wing of the CRJ

In brief, aircraft which are not designed to cruise in at high subsonic speeds like the Taylorcraft pictured above, wont reap any benefit from the supercritical wing and thus, don’t need one.

Today, there are still numerous airliners that do not have supercritical wings and are thus limited to slower subsonic cruising speeds. Supercritical wing technology is still fairly new in aviation terms and it will take time for conventional airfoils to be phased out. Soon however, the adaption of supercritical airfoils will become the industry-wide standard.

I feel pretty fortunate to be able to fly an aircraft which can comfortably cruise in the low .8 mach range. This allows me, and of course the people on board, to zip right around some of the old timers out there and get to where we are going faster and more efficiently. This means faster travel times and lower ticket prices.

And to think that all of this is due to a little-known invention from the ‘70s called the supercritical airfoil!

View all posts by michaelsoroka